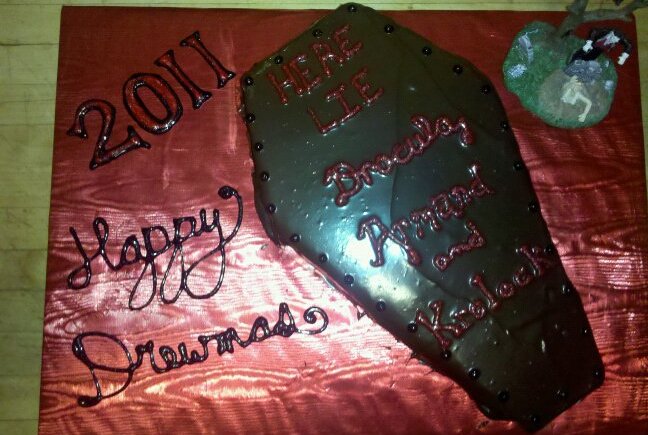 Drewmas 2011 was a really good time! I celebrated with my best friend and her family (including husband, daughter and parents) – it was an inter-generational fest!

I couldn’t find a bakery near by who had the ability to do the whole edible-frosting-printing thing who would let me use a good picture of Drew – the only place who could do it said that I would have to use a picture that wasn’t copyrighted or that I owned the copyright for. This meant I would have had to use one of my stagedooring pictures of me with Drew. I went to my friend who is a very talented baker and cake decorator and explained my dilemma to her – specifically that putting a picture of myself with Drew Sarich on a cake, to which she responded “Well I’m glad you draw the line somewhere…” – My friends tolerate my crazy, it’s why I love them. 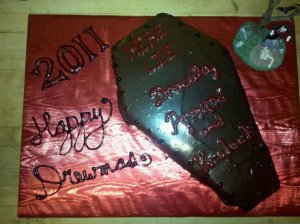 Here’s a picture of the Drew’s-Vampire-Characters themed Drewcake – you can find more pictures of it on the Drewcakes page.

The cake is in the shape of a coffin (we went to the cake supply store to get something else and saw a coffin-shaped cake pan and knew we had to use it somehow!) The coffin says “Here lie Dracula, Armand and Krolok” all vampire characters Drew is rather famous for portraying. At one point during the day I walked in on my friend explaining the cake to her father: “Apparently he’s played 4 different vampire characters in 3 different shows, though I’m sorry to tell you you’re learning this from someone who couldn’t pick him out of a crowd.” My poor friend and her family, not really knowing Drew Sarich! See, this is why Drewmas is important! Everyone should know who Drew Sarich is!